Review: The Voyage of the Dawn Treader 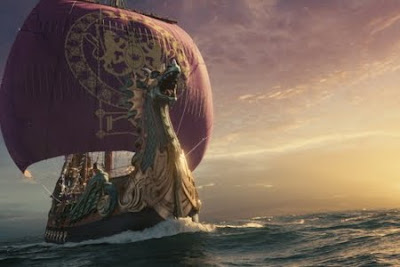 Based on the best-selling children’s fantasy novel by CS Lewis, The Voyage of the Dawn Treader is the third film in the Chronicles of Narnia series, and a none-too-subtle Christian allegory about the quest for a spiritual life.

As in the first two films (The Lion, the Witch and the Wardrobe and Prince Caspian), the film’s protagonists are children from our world – specifically England during World War II – who find themselves drawn into the magical world of Narnia, where animals talk and mythological creatures such as dragons and fauns coexist with human beings.

In this latest installment of the franchise, filmed in Queensland, Edmund Pevensie (Skandar Keynes) and his younger sister Lucy (Georgie Henley), along with their odious cousin Eustace Scrubb (Will Poulter), are swallowed by a painting and transported back to Narnia, only to find themselves floundering in the Great Eastern Ocean, far from land.

Rescued from drowning by King Caspian (Ben Barnes, returning to the role he first played in 2008’s Prince Caspian) and a warrior mouse named Reepicheep (voiced by Simon Pegg, taking over from Eddie Izzard, who voiced the character in the previous film) the children are taken aboard Caspian’s ship, the dragon-prowed Dawn Treader, on a quest to uncover the fates of the seven lost Lords of Telmar, the exiled best friends of Caspian’s murdered father.

As the companions sail into ever further into the unknown east, they must overcome personal temptations, explore mysterious islands, and fight dreadful foes before they can be reunited with their friend and protector, the great lion, Aslan (voiced by Liam Neeson).

Whereas the first film of the franchise was all-too-faithful to the book it was based upon, giving the cinematic version of the story no room to breathe, and the second film took considerably more creative liberties with the text, The Voyage of the Dawn Treader sits somewhere between the two. Unfortunately, despite rearranging elements of the story to suit the storytelling conventions of cinema, screenplay writers Christopher Markus, Stephen McFeely and Michael Petroni, together with director Michael Apted (the Seven Up! series) have failed to create an engaging or satisfying film.

Fans of previous entries in the franchise will question such elements as the loss of Caspian’s Spanish accent, which has vanished completely, while film buffs will question the necessity of much of the film’s awkward and laboured dialogue (which relies heavily on clichés, such as the line uttered by the wizard, Coriakin (Bille Brown): “To fight the darkness out there, you must first defeat the darkness within.”).

Action scenes are brief and generally unsatisfying, save for a dramatic battle with a sea serpent late in the film, while overall the film feels episodic, like a bad road movie – hardly surprising given the plot’s reliance on voyaging from island to island in search of the lost lords and their magic swords.

The CGI is often poor – typified by a distinctly unconvincing sea nymph, or nereid – and not even the appearance of a dragon can lift the film’s generally flat and stilted feel; while its post-production conversion to 3D adds nothing to the story.

One of the few pleasures of watching The Voyage of the Dawn Treader comes from spotting various Australian actors playing supporting and minor roles, including the aforementioned Brown as well as Bruce Spence, Roy Billing, Terry Norris, and most prominently Gary Sweet as Lord Drinian, the Captain of the Dawn Treader (though his accent, which shifts from Irish to Scottish to English at various points in the film, distracts from his performance).

Performances from the young leads, especially Georgie Henley as Lucy Pevensie, have improved dramatically since The Lion, the Witch and the Wardrobe, although Will Poulter’s Eustace Scrubb is perhaps a bit too unlikeable; and to the film's credit it is well-paced and never drags, though this seems to have been achieved at the cost of fleshing out some scenes in the journey east.

Finally, as an atheist, I found the film’s heavy-handed approach to its religious subtext more than a little galling. Constant reference is made to the importance of faith; the character’s individual struggles with temptation throughout the film clearly reference the Seven Deadly Sins (well, most of them – there’s no room for lust in a PG-rated fantasy); and the final scene, in which Aslan is directly equated with Christ, was almost too much to bear.

Truly it seems that, in the words of CS Lewis biographer and academic Alan Jacobs, Narnia’s creator has become ‘a pawn in America’s culture wars’.

The Chronicles of Narnia: The Voyage of the Dawn Treader opens nationally on Thursday December 2.

Posted by richardwatts at 4:49 pm